Results of the addiction treatment model of the Takiwasi Center

Our almost 30 years of clinical experience indicate that the interaction between traditional Amazonian medicine, psychotherapy and spirituality, proposed by the therapeutic model of the Takiwasi Center, turns out to be very successful in the treatment of addictions and other mental health disorders. We believe that the articulation of these different therapeutic approaches greatly benefits the outcome of the treatment and thus is showing a path to follow in the global search for mental well-being and good living.

It is the initial vocation of the Takiwasi Center to associate clinical practice with research as it appears in its full name: Center for the Rehabilitation of Drug Addicts and Research on Traditional Medicines. Since the beginning of its operation, the Takiwasi Center has permanently evaluated its activities, its patient population and the results of its therapeutic interventions (Giove 1996, 2002; Mabit, 2007; Mabit & González, 2013) in order to constantly improve its model. The study published by Dr. Rosa Giove in 2002 shows that in a group of 100 former patients contacted two years after leaving the Center, the recovery rate is 54%, reaching 67% considering only those patients who completed the treatment (average duration of 9-12 months) receiving therapeutic discharge.

Nevertheless, in order to avoid the bias of self-evaluation and to respond to the economic and technical demands of a high-level scientific investigation, it has been sought to summon external and independent researchers. The need for scientific research on the data recorded in our Center and the consequent validation through its publication, has led us to participate in a growing number of research works in collaboration with academic institutions of global excellence such as the Center for Addictions and Health Mental (CAMH) from Toronto, Canada, and the University of Fribourg in Switzerland, just to name a few. Thus, more than 70 research papers for thesis or master's degrees have been published3.

To improve the evaluation accuracy of our therapeutic proposal and contribute to a broader understanding of the mechanisms of addiction, at Takiwasi we have standardized our institutional processes by creating a computerized system for collection, systematization, management and evaluation of therapeutic and clinical information called Plus (Saucedo et al., 2018). This instrument creates favorable conditions for independent researchers who approach Takiwasi to conduct scientific studies of the highest quality on the use of Amazonian plants in therapeutic contexts.

Below, we want to summarize some of the most outstanding results recorded in recent academic publications that highlight the efficacy of our therapeutic model.

On several occasions, it has been suggested that the good treatment results of Takiwasi could be attributed to the fact of taking in a population of less serious addicts, with less history and quantity of consumption, without psychiatric comorbidities, without previous hospitalizations. Recent research carried out in Takiwasi to define the severity of addiction shows just the opposite.

Upon arrival, the average patient is highly stressed, dealing with significant levels of craving, in a state of poor physical, mental, and emotional health, embroiled in social and family problems, and struggling to find meaning and purpose in life. When comparing the scores of the addiction severity index A.S.I. of Takiwasi patients with a sample of patients from the United States, it can be observed that, on average, Takiwasi patients present a comparatively more serious problem in the psychiatric and drug use domains (O'Shaughnessy et al., 2021).

Takiwasi's treatment model appeals to a heterogeneous group of patients that is not limited to locals. Takiwasi receives patients from Peru (42%), other Latin American countries (34%) and North America / Europe (24%) (Berlowitz et al., 2020). Patients mainly suffer from dependence on cannabis (72%), alcohol (52%), cocaine / PBC4 (48%) and other substances. Several studies have shown how the use of multiple substances or polydrug addiction is a common characteristic of Takiwasi patients, affecting 84% of them (O'Shaughnessy, 2017; Berlowitz et al., 2020).

The different origins of our patients indicates a capacity of adaptation of the model to people of different social levels and cultural contexts, as well as very different types of consumption. The plasticity of the therapeutic protocol allows the Amazonian peasant consumer of PBC, to coexist for several months with the professional of urban origin consuming cocaine and the young European emerging from a psychotic outbreak induced by cannabis.

Common reasons for selecting our treatment program include: an interest in Amazonian medicine, Takiwasi's innovative treatment concept, previous unfavorable experiences with conventional treatments, desire for self-transformation, and spiritual / existential motivations (Berlowitz et al., 2020). However, this "average patient" profile falls short when it comes to describing the differences between each patient and their respective life stories. Many patients have tried multiple conventional treatments before arriving at Takiwasi, which is often considered a last resort (sometimes desperate), suggesting a certain severity of addiction in patients who come to our Center (O'Shaughnessy, 2017).

At the end of treatment, patients show a significant decrease in the level of severity of addiction: drug use, alcohol use, psychiatric status and social / family relationships. Emotional stress also decreases significantly, as does the desire to use substances or craving. On the other hand, the perception of quality of life increases significantly (Berlowitz et al., 2019). These trends are reported in Figure 1 proposed below.

There are also significant improvements in neuropsychological functioning. In addition, it should be noted that all these changes appear early during treatment and are maintained over time (O'Shaughnessy et al., 2021).

These results provide clear indications of the effectiveness of the use of traditional Amazonian medicine within the protocol developed by Takiwasi for the treatment of addictions.

3. Efficacy in treating depression and anxiety

ATOP (Ayahuasca Treatment Outcome Project) is an international research project that since January 2016 has been collecting data on Takiwasi patients with the aim of validating the efficacy of traditional Amazonian medicine in the treatment of addictions (Rush et al., 2021). It has been developed by a multidisciplinary and international research team that includes contributions from several countries and is led by Dr. Brian Rush, from CAMH in Toronto, Canada.

In Takiwasi, the ATOP project is now in the phase of analysis of the results of more than 100 patients evaluated with a follow-up up to one year after the therapeutic discharge. The task consists of integrating the quantitative data related to the severity of the addiction, comorbidity, quality of life, etc., with the qualitative information that collects the experiences of the patients before, during and after the treatment, identified by them as significant in their personal recovery process. The challenge is great and at the same time motivating due to the possible implications that this research may have at the public policy level so that alternative treatment proposals are available to as many people as possible.

Some results are already available: a study developed in Takiwasi and related to ATOP shows that the Takiwasi treatment model is very effective in treating depression and anxiety (Giovannetti et al., 2020), which often go hand in hand with addiction, thus confirming what has been previously suggested in other studies.

At the end of the treatment, Takiwasi patients register a significant reduction in the average scores for anxiety (which drops from 20.8 to 11.6) and depression (which falls from 18.7 to 7.5) as reported in Figure 2. Upon entering treatment, 38% of the patients had moderate to severe depression and 61% had moderate to severe anxiety. At the end of the treatment, the scores of both drop drastically and 87% of patients present mild or minimal levels of depression, while 81% present mild or minimal anxiety levels, which are considered common for all people who are in a normal state of health. Notably, patients with opioid addiction show the greatest reductions in depression and anxiety scores. 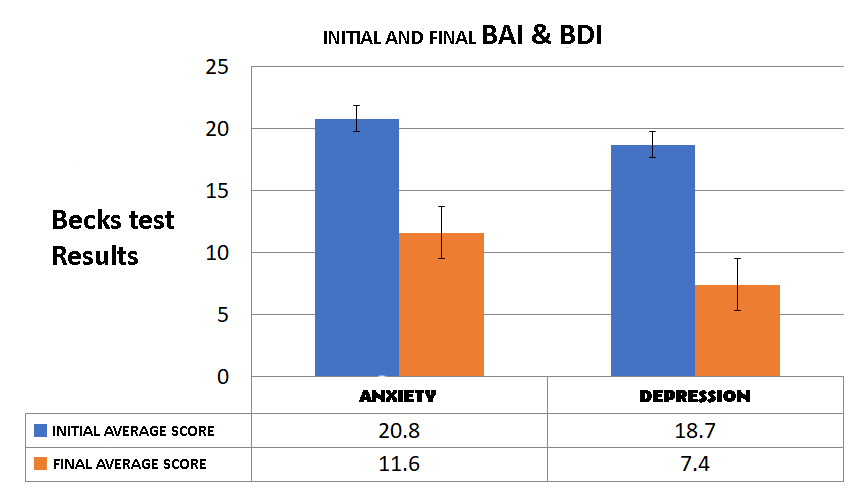 4. Improved quality of life and spirituality

The spiritual dimension constitutes a central axis of the treatment in Takiwasi based on the mystical or transpersonal experiences lived during the intake of plants under different modalities (purges, retreats-diets in the jungle, ayahuasca sessions). The ritualized induction of alternative states of consciousness aims to respond to the search for meaning in life and thus affect the levels of anxiety and depression. It represents a key innovative element in Takiwasi's therapeutic proposal.

The importance of this spiritual dimension including the “symbolic death” and its initiatory effect had been previously pointed out in the qualitative studies performed in Takiwasi by Anne Denys (2013).

Several more recent studies show a significant improvement in the scores related to quality of life and spirituality in Takiwasi's patients (Berlowitz et al., 2019; Giovannetti, 2020) as reported in Figure 3. In addition, the scores of quality of life and spirituality generally correlate positively with a reduction in depression and anxiety. In other words, patients with the highest score increases in the dimensions of spirituality and quality of life tend to show the strongest improvements in the measures of depression and anxiety. Another study shows that the same positive correlation occurs between improvement of spiritual / religious well-being and reduction of craving (O'Shaughnessy et al., 2021), as reported in Figure 4. These are common important indicators of the success of the treatment and also of the prevention of relapses.

In Takiwasi’s addiction treatment protocol, Catholic spirituality, faith, and mystical experiences act in synergy with indigenous spirituality and the cosmogony related to the use of traditional medicine (Dubbini et al., 2020a, 2020b). Once the treatment is completed, patients show a greater purpose and sense of life. It should be noted that spiritual experience is not automatically related to affiliation to a religion. The implication is that Takiwasi can be beneficial even for patients who reject Christianity and its principles (predominant in the local culture), or religion in general (O'Shaughnessy, 2017). 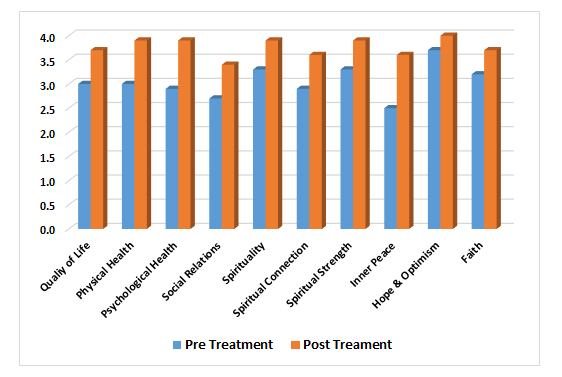 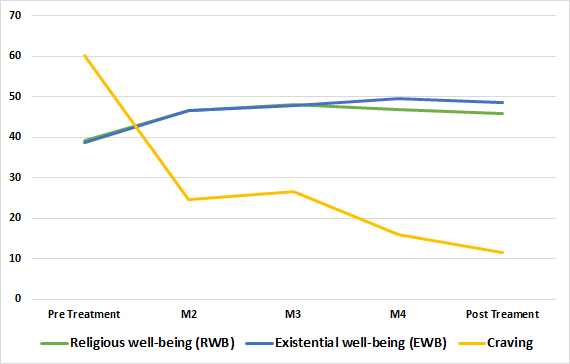 These studies provide clear indications on the efficacy of Takiwasi’s treatment model. However, it is difficult to say with certainty which are the causative agents of the improvements in patients. The merit surely does not only go to Ayahuasca, which in any case has a central role. In fact, in the weekly psychological interviews the patients value different aspects of the treatment and that varies according to each individual, but in general many patients speak very positively of the traditional master plant dietas that are considered by the same therapists as the key element for a structural change in the person (Berlowitz et al., 2018).

The ability of building some resistance to stress along time has also been observed and fits well with the way patients tend to speak about this treatment program (O'Shaughnessy, 2017). They often describe it as a sort of “training” where they get prepared for their chance to face the world again and test their new ability to build a better life. As one of them said: “It’s like football game. Here it’s practice, but outside is going to be the official match”. In fact, Takiwasi can be considered more like a “school of life” than simply a treatment center.