In 2002 and later in 2008, the results of the drug addiction treatment at Takiwasi were published based on an internal evaluation. The first part of these results is also included in the book “La Liana de los Muertos al Rescate de la Vida, 7 años de experiencia del Centro Takiwasi”, Rosa Giove, Ed. Devida, 2002.

In this study, the analysis of the results of the treatment in our therapeutic community was based on the follow-up performed on the patients who had left the Center after spending at least one month in it. Those who left the center during the first month were not taken into account because they only completed the detox stage and did not start the actual treatment. The follow-up has been carried out for two years after a patient's discharge

They were classified into 3 categories: 1) Good/Better for those who benefited from the process by reaching a complete healing or a significant improvement, although with the need to keep following a therapeutic process, 2) Equal/Bad for those who did not clearly benefit from their stay in Takiwasi, 3) Unknown for those patients we haven’t heard from, after leaving the Center.

Chart 1. The following chart shows the overall situation of the patients who undertook the treatment and demonstrates the high rate of success of our therapeutic process (positive change for 54 out of 100 patients). 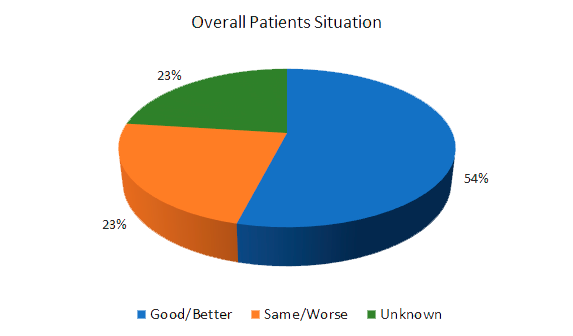 Chart 2. The following chart shows the situation of the patients who completed their treatment, and left the Center after having received approval from the therapeutic team. In this case, we can see that the rate of success is even greater (positive change for 67 of every 100 patients). 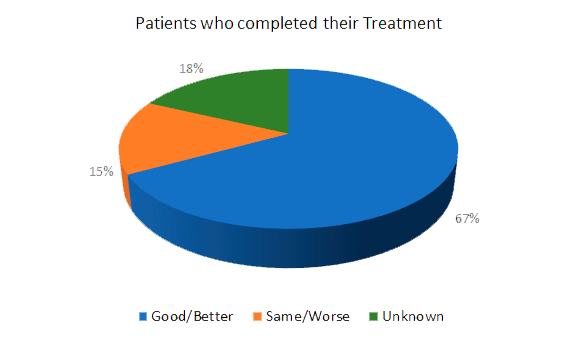 A complementary study carried out in 2005 by Anne Denys (University of Nancy, France) within the framework of a master's degree in public health, reinforced these data by appreciating the qualitative dimension of the protocol and has been published by the French Society of Ethnopharmacology. You can read the publication (in French) here.

Chart 3. Below shows some of the results of this study. The exploratory evaluation was based on interviews conducted in two parts with 15 ex-patients that participated voluntarily. The first part focused on the model of the Center and its specific objectives. The second part was based on a standardized survey - Addiction Severity Index or ASI - to assess the level of addiction.

The patients have been divided into three categories. Those that feel Good (they do not show problematic consumption and show a well-balanced overall condition in the five dimensions explored by the ASI), those that feel Better (improved situation but still problematic in one or several dimensions explored by the ASI, even if the use of substances has been interrupted), and those for whom the situation is Unchanged (without significant changes). 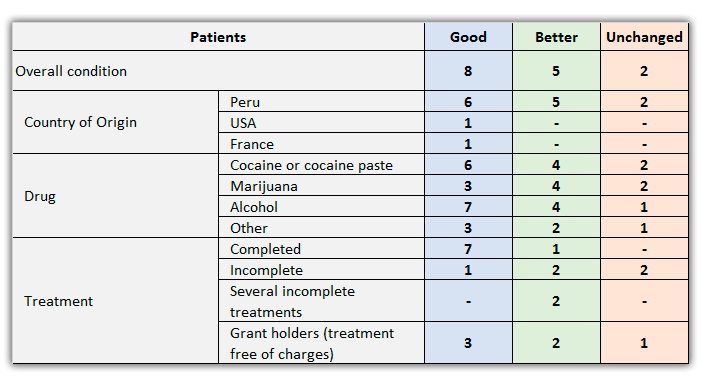 Chart 4. A comparative analysis of the patients’ population at the Takiwasi rehabilitation centre performed by David O'Shaughnessy using the "Addiction Severity Index" (ASI), shows a higher level of addiction severity when compared to a population of addicted patients in the United States. This great detriment of the health status in the patients’ population admitted at the Takiwasi Center is observed mainly in the ASI areas of Family, Drug Use and Psychiatric Symptoms. 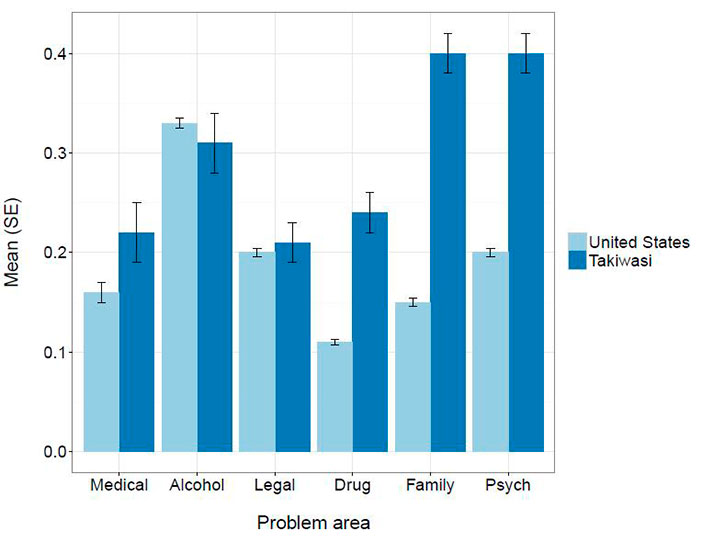 Chart 5. David O'Shaughnessy, PhD at James Cook University in Australia, in his doctoral thesis has shown a substantial improvement in conditions known to dramatically influence rehabilitation such as stress and craving.

Chart 6. A naturalistic study by Berlowitz et al. published in May 2019 in the Journal of Psychoactive Drugs, investigated the short-term therapeutic effects of Takiwasi’s addiction treatment protocol. The study found significant improvements after treatment for nearly all outcomes, including the severity of addiction symptoms (drug abuse, alcohol use, psychiatric status, social/familial relationships), substance craving, emotional distress (anxiety and depressive symptoms), as well as overall quality of life, with large effect sizes.

Below you can have a look at the results of some research conducted at Takiwasi by students and external researchers who have been able to analyze and verify the effectiveness of the treatment for addiction.

Published in Journal of Psychoactive Drugs, May 2019.

The House of Song. Rehabilitation of Drug Addicts by the Traditional Indigenous Medicine of The Peruvian Amazon.