CAMALONGA (Strychnos sp.) is a shrub native to Asia that grows in the lower Amazon basin and whose seeds are particularly appreciated by healers and practitioners of traditional Amazonian medicine for their healing power and energy protection properties. It is for this reason that Camalonga is considered a master plant or teacher plant and its seeds are also used as an amulet. Among the master curanderos or vegetalistas, one of the numerous specializations based on the plants they use the most is precisely that of Camalonguero.

In Takiwasi it is used as a containment plant for gradual impregnation in the patient's body. For its preparation, a couple of Camalonga seeds are macerated in 1.5 lt of so-called "sun water", which is water with yellow egg yolk coloring that has been exposed and charged with the energy of the first rays of the sun. Camalonga is a plant rich in strychnine, which implies a delicate handling and the exclusion of any sweet food, even fruits, from the diet during its ingestion, to avoid intoxication or cruzadera (energetic interference) that can cause symptoms that range from mild vomiting, spots on the skin to severe eye problems. It is ingested for approximately a week, taking a glass of 250 ml at night before going to bed, and produces a very important energetic cleansing. 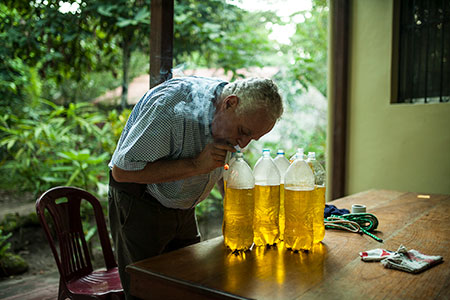 In addition, it allows the central nervous system to rebalance, it increases the desire to work and dream activity, it calms, shows transgressions and imbalances. It cleanses and harmonizes the energy body and purifies the consequences of unhealthy sexual relations. It is also used in small amounts in case of paralysis. On a physical level, at the time of ingestion it makes the person feel weak or cause headache or nausea and bitterness. Its medicinal use allows it to function as an anesthetic, muscle relaxant and tranquilizer.

Taking teacher plants such as Camalonga in containment mode allows the user to have a collateral process to their psychotherapeutic work, focusing specifically on what they need to know or learn to develop at a psychosomatic, affective, emotional, spiritual and axiological level, generating positive effects on those dimensions and in their entirety. Not separated from this, an energetic work of integration of the process is carried out at a delicate and deep level, that requires a metabolization time, inducing as a consequence a permanent structural change in the person who ingests the plants.